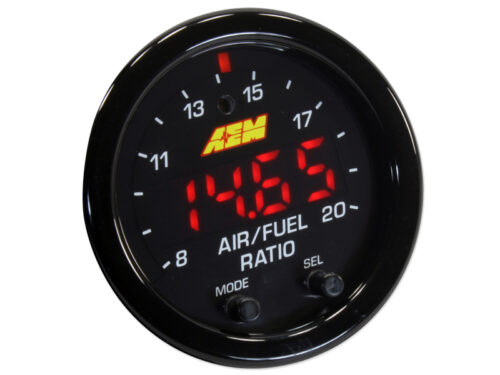 The X-Series Wideband UEGO AFR Sensor Controller Gauge (PN 30-0300) measures 2 1/16th-inch (52mm) in diameter, and features a modern, visually striking faceplate and new seven-segment center display that is 87% larger than the 30-4110 AEM Wideband Gauge’s center display. This creates the perception of a larger overall gauge, but in a common 52mm size for easy mounting. Its slim depth (less than one inch overall) and ultra slim cup depth of .200-inches dramatically increases its application base and potential mounting locations.

The X-Series Wideband UEGO AFR Gauge has a user configurable display via buttons on the gauge face that allow you to change AFR values for different fuels, Lambda or O2%, change the center display to three or four digits, perform a free-air calibration if desired as the sensor ages, and change the CAN message ID when linking multiple X-Series Inline Controllers or X-Series Controller Gauges. A black bezel and black dual-faced faceplate for air/fuel and Lambda are included, and an optional silver bezel with white dual-faced air/fuel and Lambda faceplate is available (PN 30-0300-ACC, sold separately). An Auto Dimming feature is included. Locking connectors ensure a positive connection between the harnesses and gauge and a new single board design adds to the new gauge’s durability.

The gauge includes a 0-5v and RS232 Serial Port output for feedback control and data logging, and an AEMnet (CANbus) output for data logging. AEMnet allows additional X-Series Wideband Controllers to be daisy chained together (up to 16 cylinders) for recording AFR in multiple cylinders. It supports vehicle/system voltages up to 16V, and can be used on EFI or carbureted applications, and dynamometers in applications using gasoline, methanol, ethanol, Diesel, propane and CNG.

X-DIGITAL TECHNOLOGY
X-Digital wideband technology gives these controllers the ability to read and report values that other controllers do not, which can deliver more optimized engine tuning and a safer overall operating condition. The controller’s high speed digital implementation ensures no loss of signal fidelity and full transient response, making it able to identify the slightest fluctuations in AFR and output them in full value.

WHY RESPONSE TIME MATTERS
Faster response time improves wideband feedback control, and can provide a safer, more powerful and accurate tune. AEM’s Wideband Controllers with X-Digital technology can reduce deadtime and improve the performance of your vehicle through more accurate AFR tuning. Deadtime is the delay between when exhaust gas composition changes and when that change is reported by the O2 sensor. While flow of exhaust gases (transport delay) can affect deadtime, it is not the only source. Often, the sensing elements response to the gas is the largest contributor to deadtime when an engine is in high RPM under load.

When tuning an engine using wideband AFR feedback control on an inertia dyno, deadtime affects the data you are looking at because it is reported in a different operating location than when it actually occurred. This means with long deadtimes, whatever changes you make to the base fueling will likely be in the wrong location. This can be particularly dangerous to high compression and high-boost forced induction vehicles, and EFI systems that use feedback control to auto tune.

FACTORY CALIBRATION RESISTOR OR FREE-AIR CAL, IT’S YOUR CHOICE!
The X-Series Wideband Gauge and X-Series Inline Controller support the popular Bosch 4.9LSU sensor and can utilize both the factory calibration resistor and free-air calibration methods**. This allows users to take advantage of the precise factory resistor calibration when a sensor is new but then allows for free-air calibrations if the user desires when the sensor ages. It’s the perfect marriage of simplicity and accuracy!

WHY USE A WIDEBAND AIR/FUEL CONTROLLER?
Accurate AFR data is critical when tuning an engine. Running rich (very low air/fuel ratio, excessive fuel) can cause a loss in power, while running too lean (very high air/fuel ratio, not enough fuel) may result in serious engine damage. Using a wideband air/fuel controller during the tuning process allows you to monitor AFR and adjust tuning parameters to optimize them for maximum power and efficiency. AEM has a comprehensive line of highly accurate, reliable wideband air/fuel controllers that can help ensure your vehicle is optimally tuned.

CAN I CHANGE THE AEM UEGO SENSOR’S CONNECTOR?
No. There is a laser-etched, calibrated resistor in the sensor’s connector body. This resistor is specifically created for the exact sensor that it is attached to. Modifying this will invalidate the sensor’s output.

* Independently tested at 360° Product Testing (results reported on August 31st, 2015) against 17 competitor wideband UEGO Air/Fuel Controllers. AEM X-Series Inline with Bosch 4.9LSU wideband sensor and AEM X-Series Wideband UEGO AFR Gauge with Bosch 4.9LSU sensor recorded the fastest response times.
** Wideband UEGO sensors are wear items and their lifespan is determined by many factors including contamination from leaded fuels, automotive fluids, particulates, mechanical or thermal shock and from being unheated and exposed to the exhaust stream. Free-air calibration may correct drift as a sensor ages, but it is recommended that they are replaced as part of your vehicle’s maintenance program. When performing free-air calibration, please follow the procedure outlined in the instruction manual.

AEM was founded in 1987 by John Concialdi (J.C.) and Bob Sullivan as a tuning performance shop. The shop focused on vintage automobiles and the latest trends in street racing modified imports. With it's location in Compton California, AEM was embedded in the tuner market from the very beginning. It was a matter of being in the right place, at the right time, with the right technical knowhow. Between J.C. and Sullivan, AEM had two important advantages. Technical engine knowledge and massive creativity fueled by an unbridled passion to make things go faster. When it came to understanding air flow through an engine, few had more experience than Concialdi. He managed the R&D department for Weber Carburetors for North American aftermarket applications the previous 10 years. By 1993 when the shop relocated to Gardena California, AEM had the reputation as a modifier of choice. The business had grown so much that at times it ran 24 hours a day. Racers depended on AEM to have cars ready for the next street race or sanctioned event. Cars and drivers sporting AEM’s bright yellow logo became famous in the street racing scene for one consistent reason, they won races. AEM’s first glimpse of mainstream notoriety came when cars tuned by their shop won at the “Battle of the Imports”. This highly contested shoot-out landed AEM on the cover of Turbo Magazine and Sport Compact Magazine. Many of the most visible drivers in import street racing ran cars modified by AEM. This included names like Adam Saruwatari, Tony Fuchs, Brian Kim and Darin Ishitani, Archie Medrano, Russ Matuseavich, Abel Iberra, Miles Bautista, E.T. Saffon. AEM developed one of the first Packaged Air Induction Systems. It's design came from their experience in dyno testing, understanding intake energy dynamics and racing at the Battle of the Imports. AEM’s presence in the tuner movement and its proximity to Nissan, TRD and Honda allowed them a unique opportunity. There was an advantage to living side by side with racers and working with OES engineers. AEM was able to understand both the practical and theoretical side of engine performance. AEM's first air intake kit was offered for sale in 1994 as a "Do-It-Yourself" upgrade for the Honda CRX. This intake proved to be the beginning of a whole new tradition. People could suddenly purchase affordable cars and modify them for increased torque and horsepower. AEM has been a leader in the development of precision tuned induction systems since the Battle of the Imports. Today, the Company’s induction systems number in the hundreds. AEM is still the one to beat.

There are no reviews yet.

Send us a message and we’ll order it in for you!