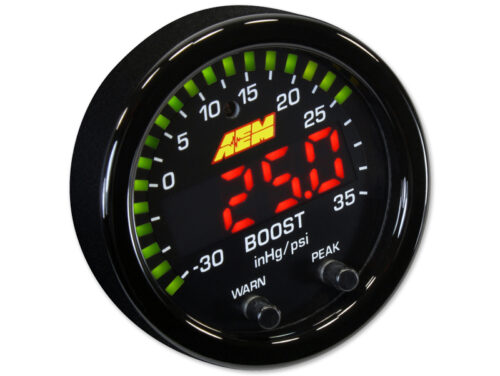 AEM’s 30-0306 X-Series -30in/Hg~35PSI / -1~2.5BAR Digital Boost Display gauge combines incredible looks, increased readability and a multitude of new, easy-to-use features! It is a must for users who want highly accurate boost pressure readouts up to 35 PSI or 2.5 BAR in their high performance vehicle.

EASIER TO READ
Visual improvements include a bright center LED display that is 87% larger than our original digital gauges and provides better readability. A sweeping green LED “needle” lines the edge of the gauge face for quick reference. A 33% overall increase in the gauge face display makes it easier to see at a glance.

EASIER TO MOUNT
Despite the larger display, X-Series Gauges are contained in a standard 2-1/16th-inch (52mm) diameter housing for mounting in a standard gauge pod. Thanks to an advanced single board design, X-Series Gauges have an incredibly slim overall depth of under 0.825”, with a cup depth of only 0.200.” This shallow cup depth allows X-Series Digital Gauges to be mounted practically anywhere.

SMARTER INTERFACE
X-Series Digital Gauges include new technological features that make them easier to use. Two buttons on the faceplate deliver programmability for peak/recall, standard or metric center LED readout and sweeping LED needle, and user-selectable threshold warnings. The gauges are AEMnet CAN-bus enabled, so they can be daisy chained together for use with the Infinity ECU, Series 2 EMS, AQ-1 Data Logger, or 3rd party EMS or logger that accepts AEMnet. 0-5V analog outputs are also included for inputting into data loggers and engine management systems.

AEM was founded in 1987 by John Concialdi (J.C.) and Bob Sullivan as a tuning performance shop. The shop focused on vintage automobiles and the latest trends in street racing modified imports. With it's location in Compton California, AEM was embedded in the tuner market from the very beginning. It was a matter of being in the right place, at the right time, with the right technical knowhow. Between J.C. and Sullivan, AEM had two important advantages. Technical engine knowledge and massive creativity fueled by an unbridled passion to make things go faster. When it came to understanding air flow through an engine, few had more experience than Concialdi. He managed the R&D department for Weber Carburetors for North American aftermarket applications the previous 10 years. By 1993 when the shop relocated to Gardena California, AEM had the reputation as a modifier of choice. The business had grown so much that at times it ran 24 hours a day. Racers depended on AEM to have cars ready for the next street race or sanctioned event. Cars and drivers sporting AEM’s bright yellow logo became famous in the street racing scene for one consistent reason, they won races. AEM’s first glimpse of mainstream notoriety came when cars tuned by their shop won at the “Battle of the Imports”. This highly contested shoot-out landed AEM on the cover of Turbo Magazine and Sport Compact Magazine. Many of the most visible drivers in import street racing ran cars modified by AEM. This included names like Adam Saruwatari, Tony Fuchs, Brian Kim and Darin Ishitani, Archie Medrano, Russ Matuseavich, Abel Iberra, Miles Bautista, E.T. Saffon. AEM developed one of the first Packaged Air Induction Systems. It's design came from their experience in dyno testing, understanding intake energy dynamics and racing at the Battle of the Imports. AEM’s presence in the tuner movement and its proximity to Nissan, TRD and Honda allowed them a unique opportunity. There was an advantage to living side by side with racers and working with OES engineers. AEM was able to understand both the practical and theoretical side of engine performance. AEM's first air intake kit was offered for sale in 1994 as a "Do-It-Yourself" upgrade for the Honda CRX. This intake proved to be the beginning of a whole new tradition. People could suddenly purchase affordable cars and modify them for increased torque and horsepower. AEM has been a leader in the development of precision tuned induction systems since the Battle of the Imports. Today, the Company’s induction systems number in the hundreds. AEM is still the one to beat.

Send us a message and we’ll order it in for you!